This is part of a series of posts based on scripts, written for class presentations during our Masters in Integrated Sustainable Design at National University of Singapore.
The class had to analyse various complex systems in Singapore, as a precursor to the Design problem in Studio. The systems included are – Red (energy), Blue (Water), Green I (Biodiversity), Green II (Food) and Grey (Public Space).
The following posts elaborate on the Red System.

Welcome to Part 4/5 of our series on the Energy System of Singapore. Part 1/5 established that the system has a gap at the neighborhood scale, that it is highly centralized and the largest demand sectors are Industrial and Commercial. Part 2/5 analysed the timeline of the system from the 1800s to present day, and looked on to the future – with a focus on important policies and events, and their corresponding effects.

Part 3/5 looked more deeply into the System’s Flows & Exchanges. Important findings were that there is a high dependence on fossil fuels mainly Petroleum Products and Natural Gas for both direct consumption and generation of electricity. Also, despite efficient gas turbines for electricity generation, there are high conversion losses of up to 40 per cent as heat. However, the transmission losses remain low. A large percentage of transportation is also powered using fossil fuels. Within sectors, the highest consumption is for air-conditioning loads. Considerable waste heat is generated from processes, adding to environmental heat and affecting micro-climate.

Moving on from this understanding, in this post we explore the System Structure in greater detail on 3 scales – Island, 10 km X 10 km and Building.

There is a high dependence on Imported Fossil Fuels  i.e. Oil and Natural Gas, for Direct consumption and use as Electricity as seen on the regional map showing import sources.

Unlike the green (biodiversity and food), blue (water) and grey (public space) systems, the Red system is Non-Spatial, and thus does not particularly affect urban organization. At the Island scale, it appears primarily as large oil, natural gas and waste to energy power plants. Also, there are 3 biomass generation locations. Solar generation is dispersed all over the island. 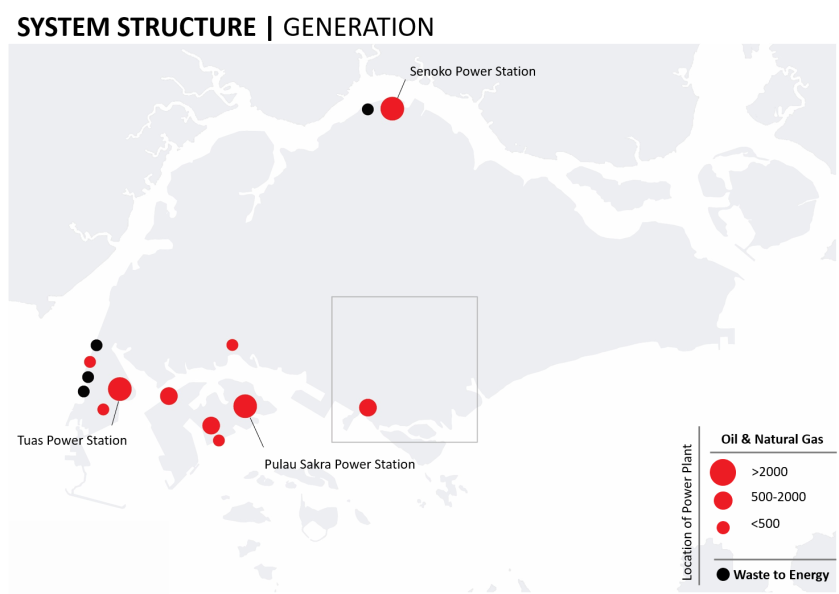 At the island scale, we also try and understand the correlation between the energy system, micro-climate and Urban Heat Island intensity, land use and built up area. The heat intensity seems to have a proportional relation to built up area. More specifically, the areas with the highest temperature difference coincide with industrial and commercial land use zones. 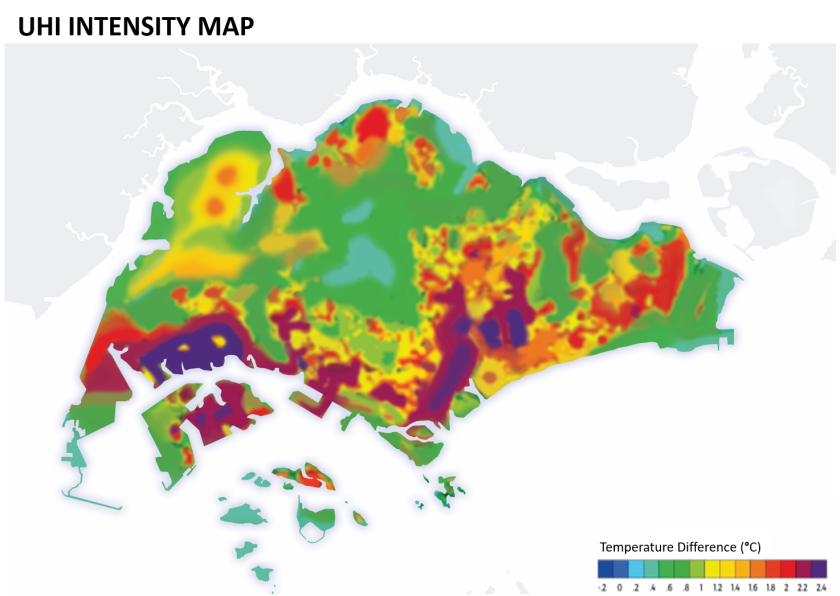 At the 10 km X 10 km scale, we see a sparse spread of power plants, some biomass and localized solar generation. There are also substations as part of the transmission network. There are few District Cooling Systems like the one at Marina Bay. And here, we see that there seems to be a direct correlation between density of built up area and UHI intensity. The highest heat areas also correspond again to the commercial and industrial land use around the Central Business District (CBD) area.

Related to this, we explore the interaction of the red system with green and blue, using the Urban Redevelopment Authority (URA), Singapore’s vision for the future of CBD as an example. 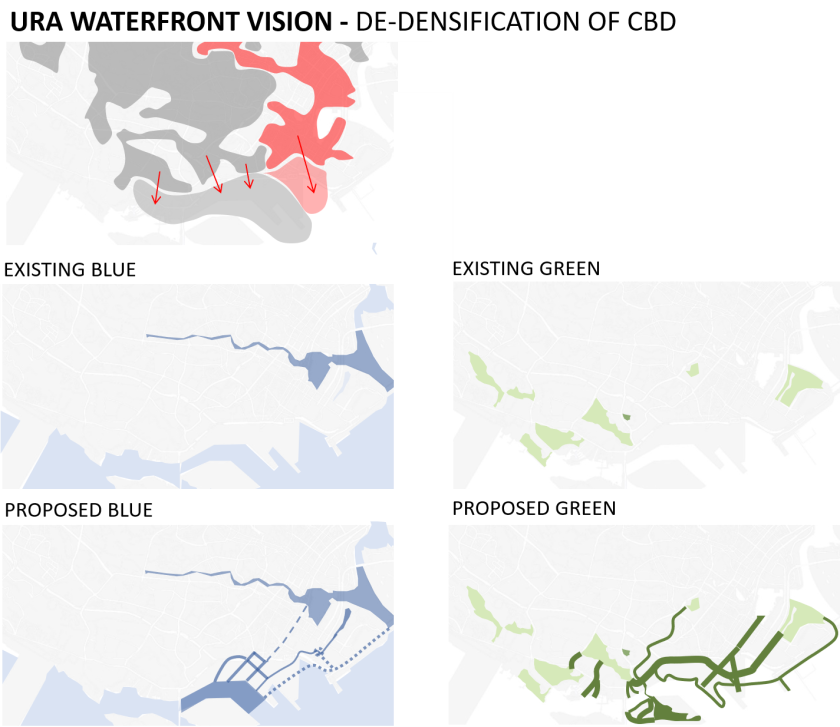 The existing network of green and blue is Interrupted by the current dense development. The blue and green areas show relatively cooler zones, while the interruption shows an area of higher heat. Thus we see that the green and blue help to mitigate the adverse effects of the red system on micro-climate. The future great southern waterfront development not only talks of de-densification of the CBD, but also aims to bridge over this interruption and complete the green and blue network, which could then improve the micro-climate of the area.

At the building scale, energy generation is seen mainly as localized substations, or as solar panels. The building typologies are explored, as to how they affect micro-climate and how they apply consumption reduction strategies. The design principles are divided into 2 broad categories – breathability and integration with green and blue systems. 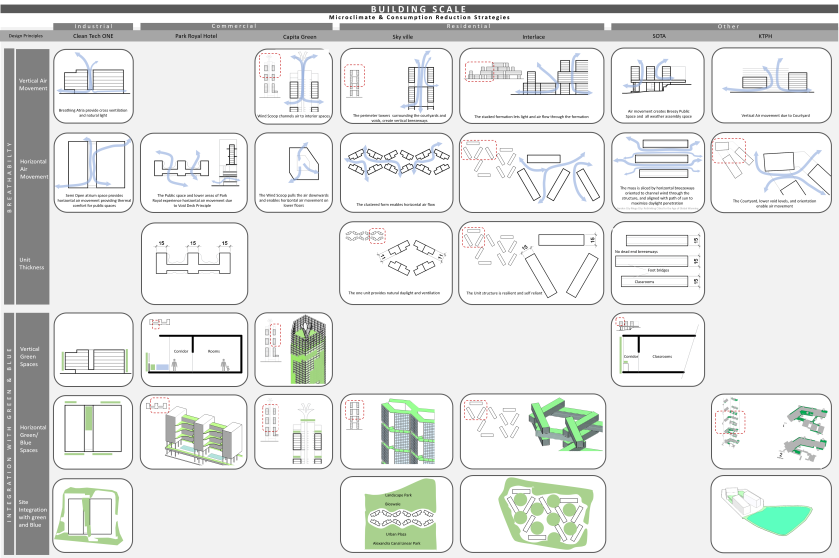 Within breathability, we look at vertical, and horizontal air movement as well as unit thickness. Air movement can aid to dissipate heat and improve micro-climate. The unit thick principle can help in natural ventilation and daylighting, thus reducing air conditioning and lighting loads.

For integration with green and blue, we consider vertical and horizontal green spaces, and site integration with the green and blue systems. We choose 7 examples within Singapore, from various building uses. Cleantech One for industrial, Park Royal hotel and Capita green for commercial, Skyville and Interlace for residential and School of the Arts and Khoo Teck Puat Hospital for other building uses. Using these examples, we plot a matrix. This helps to compare application of the same design principle across projects. It also helps to see which projects follow how many principles and how they could rate relative to others.

We hope you enjoyed this fourth post, as part of a series elaborating on the Energy System of Singapore. Do let us know your thoughts about the Red system and other related aspects in the comments section. We would love to take this discussion further!

Look out for the last post from this series next week –

4th June 2018 – Part 5/5: How can Energy be restructured to improve self – Sufficiency and reduce Emissions?

One thought on “Part 4/5: The Red System (Energy), Singapore”